What Apple has done here is to have iPads at as many price tiers as possible. These are the starting prices for the iPad lineup currently:

There's mention of how much RAM is included. I'll update this article with that info in the future.

Display is not laminated

It does not support P3 colour space like the more expensive iPad Air, mini and Pro. It's not a big deal because the sRGB LCD Apple uses still looks good.

Note that the display is not laminated. So there will be a gap between the glass and LCD beneath. This gap can create parallax but thankfully on a small display it's usually not an issue.

Apple Pencil gen 1 cannot by charged by the iPad

Older iPads can charge Apple Pencil gen 1 by connecting the stylus directly to the lightning port of the tablet.

iPad 10 (2022) uses a USB-C port but Apple Pencil gen 1 still uses lightning interface, and you can't attach the stylus magnetically to the side of the tablet for charging and pairing.

So to charge and pair Apple Pencil gen 1, you will need a USB-C to Apple Pencil Adapter (above) which is thankfully including in the box. That adapter is also available separately for US $9.

Selling a separate accessory to charge the pen is not new. Huawei M-Pencil 2 has an adapter for charging if you want to use that with the MatePad 10.4. Microsoft Slim Pen 2 needs an adapter or the Microsoft Keyboard case for charging when used with the Surface Pro.

What this means is if you may need to bring that charging adapter out if you want to charge the Apple Pencil. And Apple Pencil does not attach to the side of the tablet so you'll have to find some way to store the stylus -- just get a case with stylus slot.

64GB storage is not enough

iPadOS can take up 13-15GB of storage. After considering storage formatting, you my be left with 47GB. And after you install apps, you'll have even less storage.

The tablet is already quite pricy at US $449 and it only comes 64GB storage capacit (47GB effective).

Comparing to older and refurbished models? Are you kidding?

My reviews are not just about reviewing the product itself. I want to give you a fuller picture by comparing with other products you can buy with the same amount of money.

Here are the alternatives... 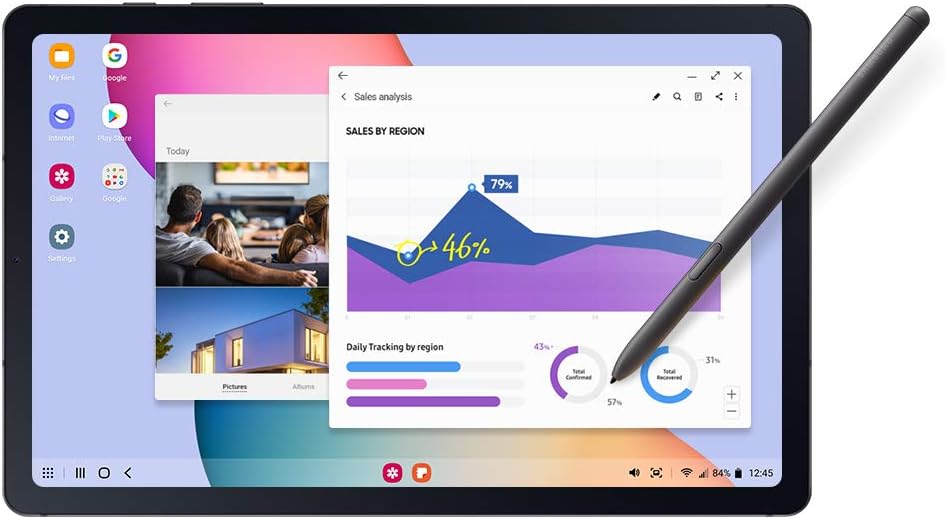 Procreate is an extremely popular and useful drawing app available only on the iPad. But there are many capable drawing apps from the Google Play Store too. The main advantage of the iPad for artists and designers is actually not the many drawing apps available but the larger variety of graphic design apps available such as Affinity Designer, Adobe Illustrator, Vectornator and Amandine.

If you don't draw

If you're not an artist or designer, and you'll just looking to buy a tablet for general usage, there are so many options out there that will provide more value for your money.

Huawei MatePad 10.4 (2022) is worth considering also. Here in Singapore, you can find the base model with Kirin 820, 4GB RAM and 64GB storage with micro SD card slot for SGD $258 (~US $200). There's Google Play Store which you can install with the help of the Gspace app. The tablet has Huawei M-Pencil 2 support but that stylus is also charged and paired with a separate accessory. The iPad is not going give you two times more value for two times the price.

As someone who has reviewed so many drawing tablets, I don't think iPadOS is a selling point over Android OS. The selling point is the Apple Pencil and the graphic design apps, and if you don't need those two, then there really isn't a strong compelling reason to go with iPad.

Competition in the tablet market is extremely competitive. There are so many tablets better than the iPad out there nowadays, and many are at more affordable prices.

Which tablet would you recommend for someone who would like to own just to surf the net conveniently and watch tv series or movies?

@Jasmine
For watching shows and movies, you can get tablets from any brand. There's no advantage to iPads.

Think about where your shows and movies are from. Are there apps for the shows?

For example, I buy my movies from Apple app store so I may prefer the iPad so that I have access to all the shows I bought in the past. But I can also access those shows from the Mac so I may not need to get an iPad.

If you don't have any brand preference, consider the 11-inch Xiaomi Pad 5, Samsung Tab S7 FE (12.4 inch), or the older Samsung Tab S7 tablets which are still very good be cheaper now as the Tab S8 tablets are out.

I paint in oils and want a tablet just for displaying reference photos, do you think the Samsung Tab S7 FE (12.4 inch) would be my best option?

@Jose Romero
It's good if you have the budget for it. The LCD colours look good.

Learn to draw
Check out my online sketching courses.
How to start an art blog
Learn how you can build a following and reach more people with an art blog.
Basheer Graphic Books
They are our sponsor! They are based in Asia but ship globally. Contact them via email or Facebook for enquires.
APD Singapore
APD Singapore (sponsor) is a book distributor/seller in Southeast Asia.
Affiliate links
Links to Amazon (US | CA | UK | DE | FR | IT | ES | JP), Book Depository, Dick Blick Art Materials and Jackson's Art are affiliate links. When you buy from those affiliate links, I earn some commissions at no extra cost to you. Your support runs this blog. Learn more.
Jackson's Art (UK)
They have free global shipping for brush purchases over £20.
Contact
You can reach me here.